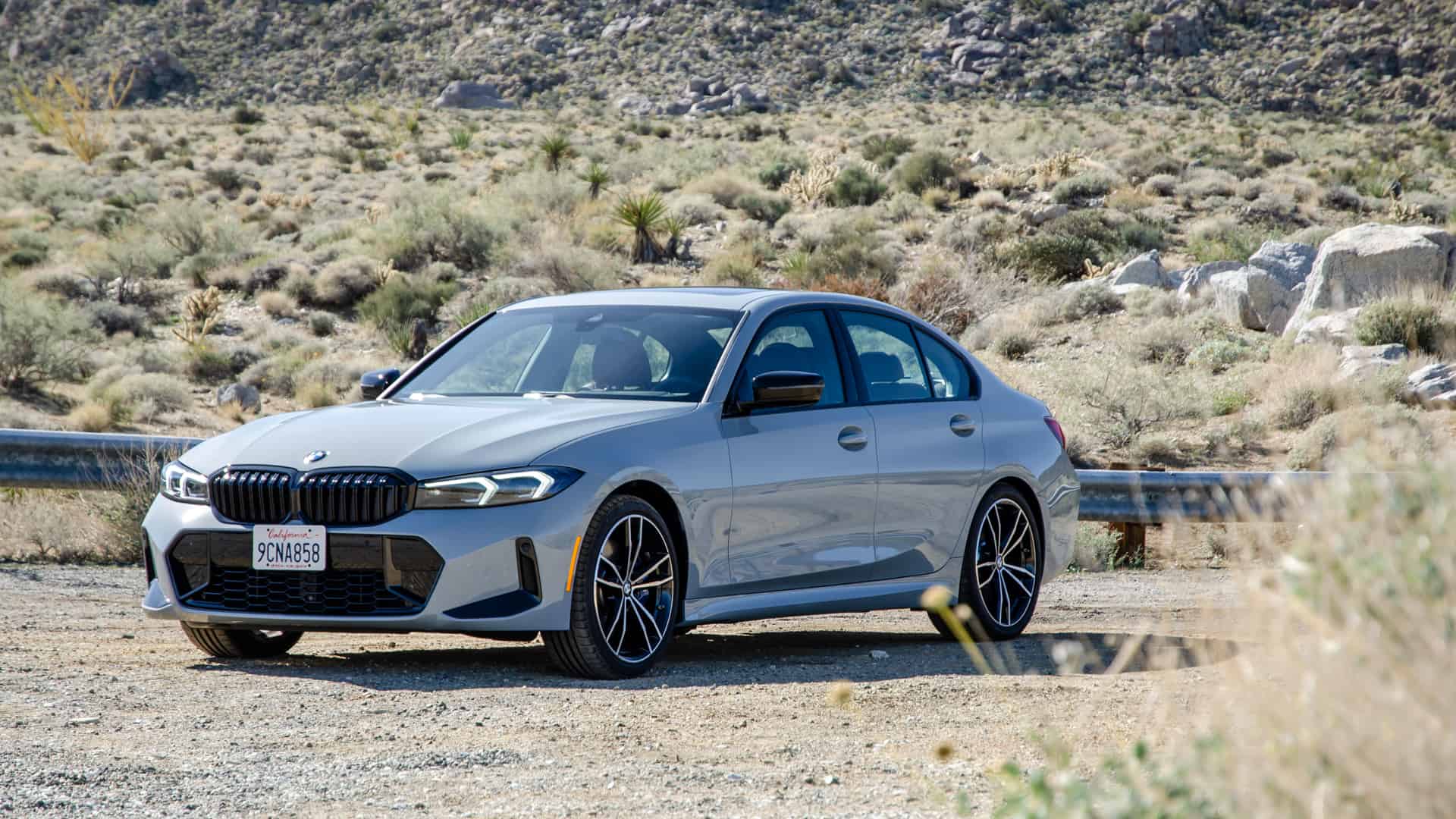 During the same press event in which I drove the new 7 Series twins, the X7 M60i, the X1, and the M4 CSL, I also drove the refreshed  2023 BMW 3 Series Facelift. I had my choice of the entire range; a BMW 330i, a 330i, and an M340i. However, I only had time for one so I had to choose wisely and I settled on the 330i because, in my mind, that’s the quintessential 3 Series and the car that best represents the brand’s values.

BMW hasn’t been itself lately. Every BMW commercial or advertisement seems to be for SUVs and small crossovers. If you didn’t know any better, you might think BMW was always primarily a truck and SUV company, as that’s clearly the brand’s media emphasis. However, BMW is supposed to be a brand that makes small, sporty sedans that focus more on handling, steering, braking, and fun than power, tech, and luxury. To me, as impressive as both the BMW 330e plug-in hybrid and M340i are, they fall into the latter camp. The BMW 330i is what a 3 Series is supposed to be.

For 2023, the 3 Series gets a typical BMW LCI update. That means new headlights, which are slimmer and sportier than before and also lose the little underneath notch of the pre-LCI car’s headlights. The grille has been tweaked, as have the front air intakes. Overall, it’s a sportier looking car than before and it looks much better in person. It’s a really sharp looking little sport sedan in the flesh and feels like home for BMW fans.

On the inside, BMW gave the 3 Series Facelift its latest tech package upgrade. Gone is the old iDrive 7, now replaced with iDrive 8, and also gone is the shift lever. It’s unusual sitting in a 3 Series and not having some sort of shift lever, even an electronic one for an automatic transmission. However, these are the times we’re in and BMW gave the 3er its now-ubiquitous toggle switch shifter. It’s actually quite nice to use, so I don’t have much of a problem with it but I will miss using an actual gear lever to shift gears manually, rather than having to only rely on paddles.

BMW’s new Live Cockpit Professional is far better than the old one, so the digital gauges are easier to read and understand, while also looking better and featuring more customization. It’s still not as good as competitors’ systems, like those found in Mercedes and Audi products, but it’s not bad, either. On the whole, BMW’s new 3 Series cabin is as handsome as it always was, just with better tech.

Still Gets the Little Things Right

One thing I always appreciate about 3 Series design, from all generations, has been their seating positions and visibility. This new 3 Series is no different. You can sit nice and low and outward visibility is excellent. Just being able to sit properly—like you’re in the car, rather than on top of it—and see out of the damn thing inspires you with confidence. That confidence allowed me to immediately get to work, tackling the twisty canyon road that I drove countless times that time.

It might not be small anymore, as all cars have become enormous, but the BMW 330i feels small enough once you’re inside and it continues to shrink around you, the harder you push it. If you’re used to BMWs, and 3 Series’ in particular, then you’ll feel right at home in the 3 Series Facelift. Having owned multiple 3 Series’ myself, getting into the 330i felt like putting on an old, familiar coat. Everything just felt right.

Everyone’s focus is always on BMW’s B58 engine and for good reason—it’s brilliant. It packs tons of power and performance in a silky-smooth package and is always ready to play. However, the cars that it powers can often be quite dull, such as the M340i, only because BMW’s M Performance cars tend to come with an added layer of luxury and sophistication, to separate themselves from the M proper. So there’s actually a feeling of lightness and purity in BMW’s lesser engined cars that’s quite refreshing.

In the BMW 330i, you only get a 2.0-liter turbo-four, with 255 horsepower and 295 lb-ft of torque. A ZF eight-speed auto is the only transmission option and, while xDrive isn’t standard, good luck finding any new 3 Series that isn’t all-wheel drive. While that might not sound like the most engaging of powertrain setups, it’s actually more than enough.

3 Series’ have never really been about power. They’ve always been about having just enough power to be fun but not so much that straight-line performance dominates the experience. And that’s true in the 2023 BMW 330i. Its buzzy little four-cylinder is actually a joy to use. It doesn’t sound particularly good, kind of like there’s a can of marbles being rattled around, but it has plenty of punch, revs smoothly, and is more than willing to take a good thrashing on a windy road.

The best part about the 330i’s four-cylinder engine, though, is that it’s lighter than the big six. That lighter weight makes the front end of the 3 Series feel lighter and more responsive. The steering is probably the same as the M340i’s (I’d have to drive a 330i back-to-back with the M340i to tell) but the front end just feels crisper, less burdened by mass. And that makes it incredibly enjoyable to slice through both twisty roads and everyday traffic. There’s a clarity to the 330i’s steering that also just isn’t found in other, more luxurious, more insulated BMWs, a clarity that I found so refreshing on that gorgeous desert day.

As much as I crap on a lot of modern BMWs (I’m harshest on the people I love because I know what they’re capable of), and much of it is deserved, there’s no hate for the new 3 Series from me. It’s still such a good little sport sedan and the exact car BMW should be making more of. On the day in which I drove the M4 CSL on one of the best roads I’ve ever driven, the BMW 330i was my favorite drive. I know, I know, that sounds absurd. But there’s honestly nothing like driving a 3 Series on twisty road.

The BMW 330i has good steering but it’s nothing overly special, nor is it anywhere near as good as the steering found on pre-F30-gen 3ers. It has a good ride/handling balance and its performance is fun but nothing overly exciting. However, to use an overly exhausted auto journalist trope, the 330i is a car that’s more than the sum of its parts.

Once you get the 330i into a rhythm, it’s just so enjoyable to hustle through a canyon. It’s quick but not frighteningly so, it’s sharp but not so sharp that it’s uncomfortable, and its ride is firm but allows for just enough roll and compression to give you a sense of what the chassis is doing and what the grip levels are. There’s a confidence that it inspires, so I was able to push it hard with a giant smile on my face, without ever once worrying that it would bite me or send me off the cliff, ending my days in an arid desert ditch.

This is What a BMW is Supposed to Be

And yet, once I was done hustling, I drove the 330i back through town, through all of Palm Springs’ geriatric traffic, in total comfort, listening to Spotify through wireless Apple CarPlay. And that’s the whole point of a BMW. Historically, BMW’s non-M cars were never about big numbers or flashy tech. They were about just nailing the combination of sporty handling and comfortable everyday driving. The new BMW 330i does that, probably better than any other BMW on sale. So as distracted as BMW seems to be from being who it really is, it’s proved that it can still be exactly what it’s supposed to be.

The BMW 330i is the simplest, least powerful 3 Series option on sale but it's also exactly what a BMW is supposed to be.